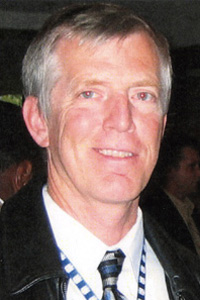 Knowing Reilly Richey meant knowing his motto: Respect is Earned, Not Given – and no one epitomized that more than this Juneau-Douglas High School football coach. Richey’s first days with the Crimson Bears football team in 1990 demonstrated that it would be a challenge to simply set the foundation for the school’s new football program. The very first practice consisted of eight players, two of whom were led off in handcuffs by the end of practice. But the Juneau-Douglas football program steadily gained footing over the years, and in 1998, Richey was selected be head coach.

Proving his dedication to the football program, Richey aggressively pursued the start-up of a junior varsity program, understanding its importance in creating a solid football program at Juneau-Douglas High School. Most of the policies and standards Richey enacted still serve as foundations for the school’s programs.

Richey’s will to win was evident not only on the football field, but also during a 13-year struggle with cancer. He passed away on March 5, 2005, after battling non-Hodgkin’s lymphoma and liver disease. After Juneau-Douglas High School won the 2005 state championship, Alaska’s football coaches named the Coach of the Year award after Richey.