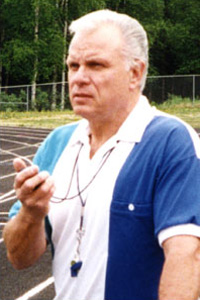 Larry Whitmore – the legendary track and field coach at Bartlett High School retired in 1991 after 24 years – Larry Whitmore began his teaching and coaching career at Bartlett in 1973. During his tenure, Bartlett’s boys and girls track teams won 23 state titles, with a combined dual meet record of 228 wins and 30 losses, including 122 individual state champions. Although his most notable coaching achievements came in track and field, Whitmore had great success coaching boys basketball. His team won the state title in 1986 and he was twice selected as State Boys Basketball Coach of the Year. Among the many honors bestowed on Coach Whitmore are: 14 time State Track and Field Coach of the Year, induction into the National High School Coaches Hall of Fame, and the “Golden Shoe Award” from Runners World Magazine in 2002. Whitmore continues to reside in Anchorage.