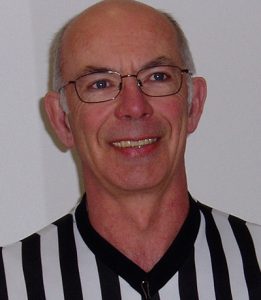 If you played or watched a basketball game or volleyball match on the Kenai Peninsula between 1991 and 2020, chances are Cordes was an official. The longtime referee was a game-day staple on the Peninsula and in other Alaska communities stretching from Unalaska to Cordova. Cordes was one of Alaska’s top referees on the hardwood and was called on to work dozens of games at the Class 1A and 2A state basketball championships, including several title games. From March Madness to kindergarten 3-on-3 games, he did it all. “He approached games not only as an official but also as a teacher,” Chris Etzwiler said. “This was evident in how he taught players rules as each new junior high season kicked off. In the beginning of the season, he took time to teach players how to line up correctly at the free-throw line and how to check into a game properly instead of running onto the court in excitement.”

A school teacher by trade, Cordes made friends easy and was hard to turn down when he asked you to serve your community. “He challenged me to become an official and give back to a game that had a huge influence on me as a student athlete. Almost 20 years I’m still using what he taught me to be part of basketball,” said Dan Miotke.

Cordes had a tremendous influence on athletes, coaches and officials in Alaska. He trained dozens of officials to carry on the commitment to excellence, attention to detail and dedication to educating the next generation. “Ask anyone not only on the Kenai Peninsula but statewide and they will most likely know of Merlin and have a story or two to tell,” Mike Etzwiler said. “He is the reason I started officiating 14 years ago and continue his legacy today.”

In 2006, Cordes helped create a youth basketball program in Homer called Bruins Basketball for boys and girls in third to sixth grade.“This level of coaching and officiating is what we need more of,” Amy Stonorov said. “The love of the sport, the dedication to educate and the fairness on which he gave, will be missed.”