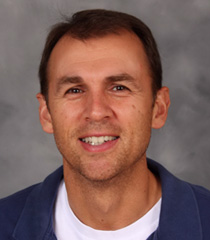 Arguably the greatest boys basketball player in Wrangell High School history, Archie Young averaged 19 points and double figure rebounds over his illustrious four-year varsity career. His career high was 52 points. At the 1991 state tournament the 6-foot-4 small forward collected 46 points and 18 rebounds. He was named all-state three times [first team twice] and led Wrangell to a state runner-up finish as a senior. In college, he averaged 33 points in one season at Clarke Community College in Washington before transferring to the University of Alaska Fairbanks. At UAF, Young was a member of the 500-point club and once held the school record for most 3-pointers [7] in a game; and he did it in back-to-back games. After his playing career, he returned to Southeast Alaska and has been teaching and coaching basketball and volleyball at Mt. Edgecumbe in Sitka for the last 15 years.