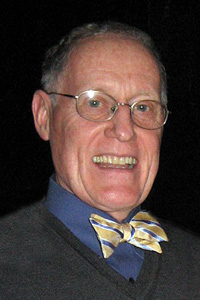 Ron Gleason served for 24 years as an administrator in the State of Alaska. He was a principal at Chatham School District and Juneau Douglas High School. He exemplified in every way his belief that engaging students in their own education was primary. During his career he served as a teacher, coach, activities director and principal. Ron represented Region V as an ASAA board member providing an effective voice for small schools. He served as Region V president from 1987-1992. At the same time he also served on the ASAA Board of Control from 1990-1996 and served as ASAA president from 1993-1996. During the 1990s athletics and activities were very political and much distrust between the regions was evident. Under Ron’s leadership major issues found resolution and set the stage for today’s more cooperative relationships. Ron had a fun sense of humor and a sparkle that thawed many a tense situation. He retired in 1999 but served for two years after that as the Director of the Alaska Association of Student Government. Currently he is the principal of Anglo-American School of St. Petersburg.