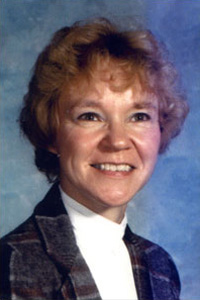 Karen Grussendorf – legendary drill and dance team advisor/coach at Sitka High School retired in 1998 after 30 years of exceptional service. Karen Grussendorf began her outstanding career as coach of the Sitka High School drill team in 1968, when the superintendent noticed how successful she was at coaching the junior high cheerleaders and pom pom squads. Because at that time, drill teams routinely marched in military style, her innovative ideas were first met with skepticism. After winning the top title at the Region V basketball tournament, the team realized the creative wisdom that Grussendorf brought to the activity. In the eleven year period from 1969 to 1979, her drill teams were Region V champions seven times. Shortly thereafter, the judging format changed to an adjudication process under which the Sitka drill team consistently received Superior ratings. Along with her teaching and coaching duties, Grussendorf found time to be involved in the production of 18 school broadway musicals and 13 others in the community, as well as with the New Archangel Dancers, the Baranof Theater Guild, and to serve as president of the board of directors of the Sitka Fine Arts Camp. She has been recognized as “Outstanding Art Educator,” recipient of the first annual award from the Alaska Library Association, and “Outstanding Woman Educator” by Delta Kappa Gamma. Since retirement, Grussendorf has remained active in the Sitka arts community where she lives with her husband, Ben.