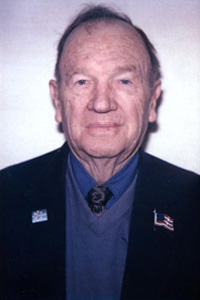 Joe Floyd – retired from 26 years of teaching and coaching at Kodiak High School in 1981- First coming to Kodiak in 1955, Joe Floyd played an integral role in the start-up of every sport at the school, and he coached most of them. He was especially active in basketball, wrestling and baseball. As a measure of the respect shown for this coach by the community, the school’s track and field facility has been named in his honor as well as the naming of the legendary “Joe Floyd Christmas Basketball Tournament.” In 1992 Floyd was inducted into the Alaska Wrestling Hall of Fame and received the Alaska Recreation and Park Association Distinguished Service Award. He served as the first Honorary Chair of the State Basketball Tournament in 2003, and was honored by his community with the 2006 Chamber of Commerce Cornerstone Award. Although he claims to have been retired for many years, he still actively contributes to Kodiak High School and the community.