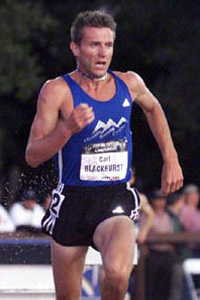 Carl Blackhurst – 1996 graduate of Haines High School. Carl Blackhurst was a phenomenal distance runner who earned four letters in cross-country running, three in basketball and four in track and field at Haines High School. In 1993 and 1995, he won the state championship in 1A-2A-3A cross-country running and then in 1994, even though suffering from the flu, finished in third place. Blackhurst’s state championship time during his senior year was faster than the winning time for the 4A boys championship. He was the Region V (Southeast Alaska) champion for four consecutive years. In 1994-95, Blackhurst was a member of the Region V championship basketball team which was the runner-up at the state tournament. While at the collegiate level at Adams State College, Blackhurst was a seven time All-American in cross-country and track. In 1998, his cross-country team won the Division II national championship. In 2001, Blackhurst was runner-up in the NCAA Division II, 3000 meter steeple chase. He was also a multi-year United States Track and Field qualifier in the steeple chase and finished 18th in the 2004 Olympic Trials. Blackhurst has returned to Alaska where he is teaching and coaching at Mt. Edgecumbe High School in Sitka.