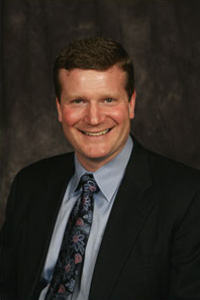 Chuck was an outstanding athlete while a student at Cook Inlet Academy (CIA). He was successful at both the individual and team level. His team sport was basketball. In 1981-1982 and 1982-1983 he was named to the Region II Basketball All Tournament Team. As an individual, he competed in cross-country running and wrestling. He qualified for the State Cross-Country Meet in 1982. In 1982 and 1983 he excelled in wrestling. He was the Region II Wrestling Champion @ 145 and 155 lbs. respectively. He was also selected as the Most Valuable Wrestler in both of those years.

After high school, Chuck attended UAA and graduated in 1987. His chosen career was law enforcement. Chuck attended and graduated from the FBI National Academy of Law Enforcement Administrators. He served as a police officer for 17 years and is currently the Chief of Police for the City of Kenai.

Chuck sets an exemplary example for his community and young people. He has served on the CIA school board, the Lee Shore Women’s Resource and Crisis Center Board and the 2006 Arctic Winter Games committee. He has continued to be involved in wrestling by coaching in Region II schools. Recently, the Anchorage Chamber of Commerce recognized his outstanding community service by naming Chuck one of Alaska’s “Top 40 under 40” for 2004.