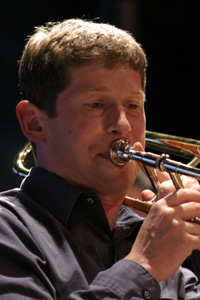 Roger was an outstanding high school musician. He participated in symphonic, jazz, pep bands, brass ensemble, and trombone quartet. He was selected three times for the SE Honor Band, ASAA’s All State Band and Orchestra, and as the 1st Trombone for All State Music.

He attended summer fine arts camps, was an exchange student to Austria and attended music school and college conservatory in Linz. He also found time to play soccer for Sitka High School. He later attended Oberlin College and Conservatory and earned degrees in philosophy and trombone performance. He studied music internationally in London and Austria. He won the International Coleman Competition with his trombone quartet. Currently, he is the Director of the Sitka Fine Arts Camp. During his tenure the program has grown from 60 to 600 students and expanded to serve students in elementary, middle and high school. The camp has been recognized nationally, earning National Endowment for the Arts summer camp recognition and the “Coming Up Taller Award” for an After School Arts Program for youth. The camp offers over 80 classes taught by 42 professional artists in a variety of fine arts fields. Roger speared headed an effort to save the historic Sheldon Jackson College Campus. It is now home to the Sitka Fine Arts Camp.