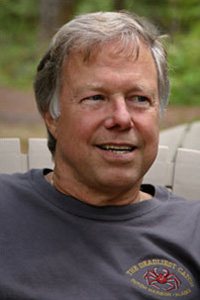 John Andrews is often known as the detail man. His attention to the complexities of administering athletic and activity events is legendary. While John served in several administrative categories, he made an important impact on high schools activities while serving as an athletic administrator at Skyview High School. He served as tournament director for 21 regional tournaments and 4 state tournaments. He was very active in professional organizations and served as a board member and secretary of the Kenai Peninsula School Activities Association, President of the Kenai Volleyball Association, Secretary/Treasurer of Region 3 and received the “Golden Apple Award” for outstanding contribution to the Kenai School District by the school board in 2001. John also served as a coach for 16 years and officiated volleyball for 21 years. John retired from the KPBSD in 2001. He continued to lend his skills and knowledge to high school athletics as ASAA’s Director of Special Events retiring once again in 2010.