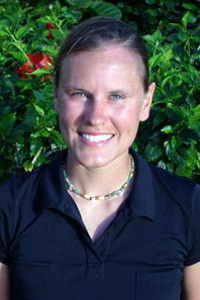 Emily Ransom Golick – 1994 honors graduate of Seward High school – How remarkable is it to win the cross-country running championship all four years in high school? It is so unusual that it has only been accomplished by two runners in Alaska prep history, and one of these was Emily Ransom of Seward. Ransom was state champion in the 1A-2A-3A races in 1990, 1991, 1992 and 1993. At the time of her fourth victory, Sports Illustrated stated that she was only the 9th girl runner in the country to accomplish this feat. She also excelled in cross-country skiing and track and field, where she was state 1600 meter champion in 1993. Ransom won the Junior Girls division of the grueling Mt. Marathon race four times. She continued her athletic career at Northern Michigan University and Washington State University as a member of the cross-country teams. Ransom earned her degree with honors at the University of Washington. She currently resides in Anchorage where she works as the Marketing Coordinator for an architectural firm. Ransom actively pursues hiking, skijoring and mountain biking with her husband and three stepchildren.