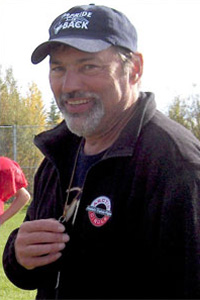 Buck Nystrom – Eielson / North Pole High Schools 1975 – 2006. Alaska’s winningest football coach, passed away early in the 2006 season – During his 31 years of coaching football at Ben Eielson and North Pole High Schools, Buck Nystrom became the dean of Alaska coaches. His overall record of 150 wins and 88 losses included twelve conference championships, two state championships and one runner-up. Nystrom’s influence on the development of football in Alaska is legendary. He initiated the football program at Ben Eielson High School and was influential in making football a recognized prep sport in the Fairbanks area. From these beginnings, football spread to the Mat-Su valley schools. But, Nystrom also had a tremendous influence upon the young men and women he coached and taught. His love of football was great but his love for the players and their families was greater. Nystrom was honored by many during his memorial service. Those in attendance at the 2006 state championships observed a moment of silence in his honor.