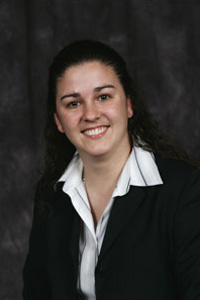 The pride of Soldotna is Molly Tuter. Molly was an outstanding basketball player. She graduated in 1993 from Soldotna High School. During her high school career, Molly led Soldotna to a State Championship and collected many honors for herself. She was the Region III player of the Year, on the 4 A All State Tournament Team, selected as the 4A MVP, and Gatorade Alaska Female Player of the Year. In addition, Molly also was an all Region III volleyball player and 1993 State Track and Field qualifier.

After high school Molly played basketball for four years at ASU. She was selected twice as an All-Pac Ten Team member. She was third in career scoring with 1,374 points and is in the top three with career steals and three-point field goals made. Molly’s success led her to become the first Alaskan female to play in he WNBA for the Phoenix Mercury. Molly’s interest turned to coaching at the college level. From 1998-2004, Molly has served as an assistant basketball coach at the University of California, Los Angles and Irving. She is currently the head coach at UCI. Her Alaskan roots are strong. She returns each summer to run the Molly Tuter Gym Rat basketball Camp for the Kenai Peninsula Boys and Girls Club.